Background and Overview of Hazard

Hydrogen is a colorless, tasteless, and odorless gas. It is lighter than air and disperses rapidly. Hydrogen is highly flammable and forms an explosive atmosphere with air over a wide concentration range. The lower explosion limit is reached at 4% hydrogen and the upper limit at 74% by volume. Any concentration within that range can be easily ignited by a spark, heat, or static electricity.

A hydrogen explosion is a violent event that can cause severe damage or destroy a building, as seen in the 2010 explosion at the University of Missouri. The explosion caused approximately $750,000 in damage. 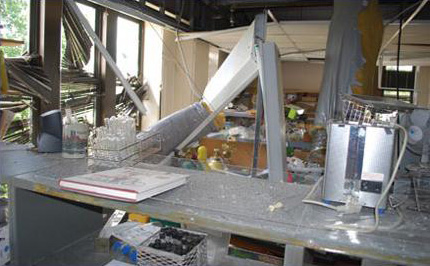 Anaerobic chambers often use small amounts of hydrogen and a catalyst to remove trace oxygen from the atmosphere through the formation of water. These catalysts can ignite explosive gas mixtures without an ignition source. Incubators, fans, and stirrers are commonly used inside anaerobic chambers and can cause ignition.

Accidentally filling the chamber with high levels of hydrogen or air leaking into the chamber can cause a fire or explosion.

It is critical that the concentration of hydrogen inside the chamber be maintained below 4% at all times. It is therefore strongly recommended to purchase a gas mixture that contains no more than 5% hydrogen in an inert gas such as nitrogen, helium, or argon to use in the chamber. Suppliers provide ultrahigh purity premixed hydrogen/inert gas mixtures at the same cost as that for pure gases. Verify that the gas cylinder has the correct mixture before connecting it to the chamber. Always leak-test gas lines after connecting a new cylinder. The chamber and airlocks should be purged with 100% inert gas before introducing any hydrogen. Hydrogen and oxygen monitors should be used in the chamber to detect problems with the gas mixtures, or oxygen leakage.

All employees and students should be trained by an experienced person on how to safely use an anaerobic chamber before being allowed to use it.