Scale-up reactions account for a number of accidents every year due to the increased hazards compared with smaller scale reactions. The purpose of the following sections is to help identify and control the hazards associated with scale-up reactions and to create a more safe and efficient synthetic route.

If the reaction is being conducted for the first time, or the scale-up reaction has potentially dangerous bonds present, fill out the Risk Assessment for Chemical Experiments worksheet before starting the experiment. Follow the steps below until you are confident the reaction can be performed safely.

Every reaction must be assessed before scale-up to determine if there is any potential for uncontrolled events. Start hazardous reactions small and increase the scale by a maximum of three-fold for each scale-up. Diligently watch for warning signs and reaction rates each time. More mundane reactions can be scaled up by more than three-fold (e.g., EDC couplings, base hydrolysis, Fischer esterification). If any reaction conditions or reagents change, restart the reaction over again at a small scale to test its safety. Avoid changing reaction conditions and reagents in the middle of an experiment.

Good communication is essential when performing reaction scale-ups. Talk with others who have done the experiment before – they may have forgotten to record some critical detail(s) about the experiment. Inform anyone working nearby who might be affected if the reaction gets out of control.

The bigger the reaction, the longer the setup, run, and workup of the reaction will take. Allot extra time for the experiment, and do not try to rush the reaction.

Temperature control is critical for safely performing scale-up reactions. Remember basic reaction kinetics. As the temperature increases, so will the reaction rate and therefore produce more heat. This additional heat then feeds into a positive feedback loop and can cause a reaction to spiral out of control. Loss of temperature control can have devastating results and cause side-products to form.

Use overhead stirrers for consistent stirring of larger reactions to prevent hot spots. Magnetic stir bars do not mix large, thick mixtures well, and overhead stirring is more consistent when scaling up from one level to the next.

Choosing the right equipment for reaction scale-up can make a major impact on the efficiency and safety of the reaction to be performed.

Solvent and reagent selection can have a critical effect upon reaction scale-up safety, especially if things go wrong. Here are a few general things to consider:

Be aware of the flammability of solvents around the equipment you choose, and take the appropriate precautions.

Reagent quality can vary greatly from one manufacturer to another.

Many reactions that have induction periods quickly turn into runaway reactions.

To control induction periods via addition rates, add 5-10% of the reactant and watch for reaction initiation. If initiation is observed, carefully add the rest in a controlled manner. If it does not initiate, add another 5-10% of reactant and monitor. Remember the more reactant that is added, the greater the chance a runaway reaction will occur once the reaction initiates! Be patient and have a cooling system ready.

Scale-up reaction workups can pose many safety issues not normally encountered during smaller scale work. A few issues to consider:

If possible, avoid chromatography when doing scale-up synthesis due to the fire hazards of large amounts of flammable solvents. The size of specialized glassware (e.g., columns) can make for difficult handling and still may not give efficient separation of eluting bands, making it necessary to repeat chromatography procedures. Try crystallizations, extractions, triturations, and washes to minimize solvent usage.

Use standard and multiple washes of aqueous solutions (e.g., 5% NaHCO3, 1M citric acid, 5% brine, 1M NaOH) and analyze (via HPLC) both the wash and the organic layer to see how much and where impurities and desired products are going.  Do not make assumptions about where they are; you might be shocked by the results! TIP – this is what good process chemists do!

Running reactions in water-miscible solvents (e.g., acetone, ethanol) makes precipitations ideal by the simple and slow addition of water. Be certain to analyze the solution to determine the amount of residual product still in solution. Tip - to maximize precipitation of product and increase the yield significantly, reduce the temperature of the mixture to 1-2oC before filtration.

Use standard crystallization methods with single or multiple solvents. Forming salts of the desired product can help with crystallizing products. Screen multiple solvents and solvent combinations (using HPLC if available) to determine which solvents are best for solubilizing the product – this can also tell you which solvents solubilize the product the least and are therefore a good co-solvent. A few examples for salting are listed below in Figure 2.

Activated carbon is a highly efficient material for removing impurities, and it comes in a multitude of varieties. Functionalized silica (e.g., amines, acids, thiols, etc.) can also be very effective for removing certain impurities such as Pd, Cu, Fe, etc.

Your goal should be to use all methods at your disposal to progressively clean up your mixture, step-by-step, and ultimately make crystallization easier to accomplish. For example, rather than “standard work up,” try washing with “standard work up” materials and analyze each layer and wash. If 5% brine is removing a significant amount of impurities, keep washing with 5% brine. Rather than just letting the organic layer stir for a few minutes with a drying agent before filtering, let the organic layer stir for 30 minutes with a drying agent and activated carbon (or functionalized silica) and then filter. 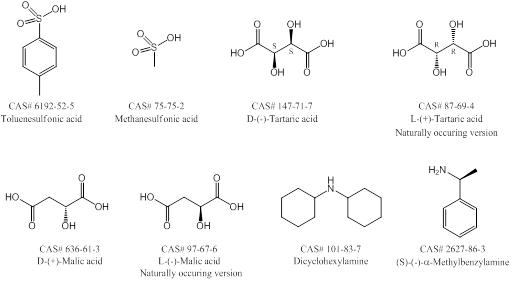 Your goal should be to create a scalable, reproducible, efficient, safe, and high yielding process so when there is a need for more of the material, it can be accomplished with relative efficiency and in a safe manner.