Some chemical compounds can be highly energetic/explosive, thus presenting significant hazards. Some classes of compounds can be sensitive and decompose into a violent release of energy and gas with the slightest input of energy (heat, light, friction, shock). Ask the following questions to determine if your experiment is potentially explosive.

Certain chemical bonds can be inherently energetic and/or unstable. Check if your experiment involves any compounds that contain one of the signature bonds shown below. Consider intermediate and side products that may form during the reaction: 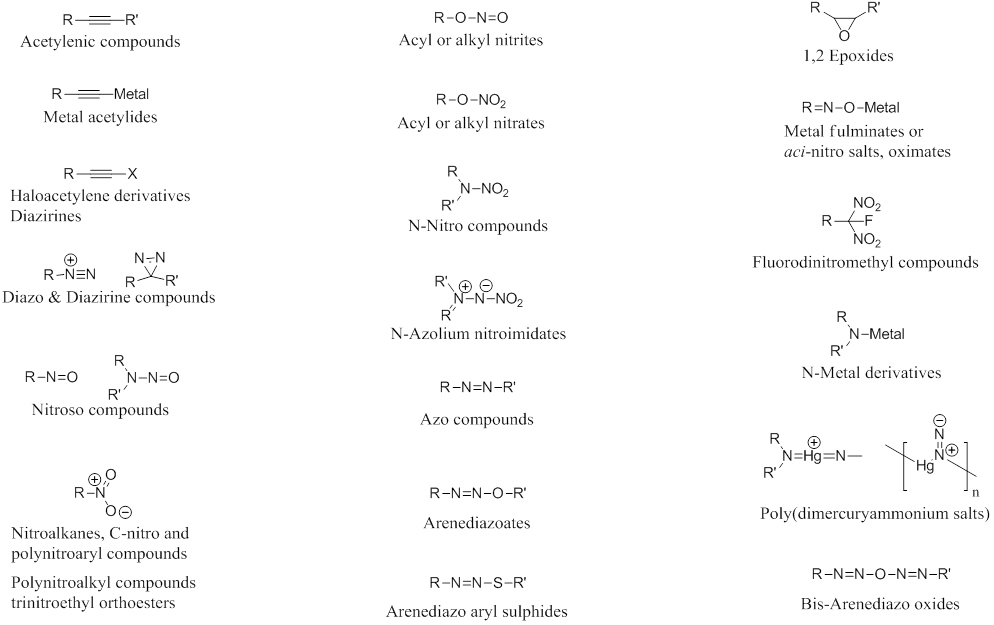 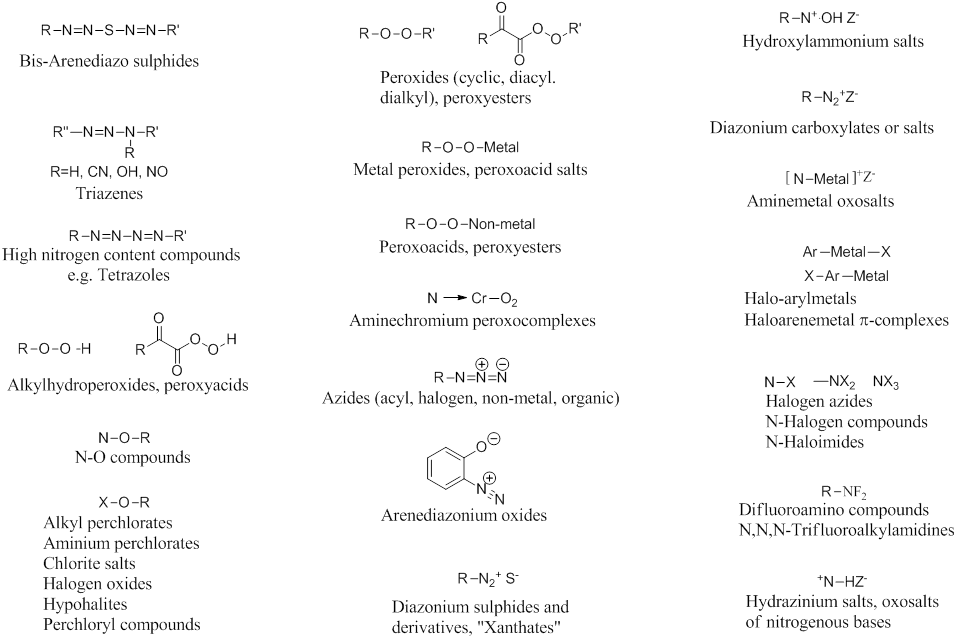 Do all compounds obey the “Rule of Six”?

The “Rule of Six” dictates that six carbon atoms (or other atoms of similar size) per energetic functional group in a molecule should provide enough dilution stability to render the compound safe.

If any compound in your experiment contain a hazardous bond and does NOT obey the “Rule of Six,” it may be explosive. Follow the safety recommendations outlined below:

Is there an alternate compound or route to produce the same end result?

Consider using alternate compounds or a different route that leads to the same destination.
For example, a distillation of diazomethane can be risky due to its explosive tendencies in bright light or when exposed to sharp/rough edges and scratched glassware. It is also highly toxic. Trimethylsilyldiazomethane (CAS 18107-18-1) is a convenient and safer substitute.

In the example below, the synthetic route shown at the top forms a highly explosive organic azide as an intermediate, making the experiment dangerous. The second route at the bottom proceeds through a mesylate, which has no explosive properties.

If no alternative compounds or routes are available, and you have to run an experiment that involves a potentially explosive compound, make sure you fully understand the risks and how to control them before proceeding.

Thoroughly review the literature about the potentially explosive compound involved. If someone else has already done the experiment, contact the researcher to obtain safety-related information that might not have been recorded.

Talk to researchers who have successfully performed this or similar experiments to learn about the safety measures and precautions they took.

Perform a thorough hazard assessment before starting a new experimental procedure. Use the Risk Assessment for Chemical Experiments worksheet to identify potential hazards. Discuss the assessment with experienced researchers to make sure that all risks have been identified and that you understand how to address them.

When performing experiments where an explosion could occur, use a face shield, blast shield, or the hood sash to protect the body from flying chards of glass, metal, chemicals, heat, and gas. A properly chosen shield can provide sufficient protection without hindering your ability to manipulate the experiment. Be aware that the hood sash provides protection only against minor explosions.

Never perform potentially explosive experiments when alone in the lab. Inform your lab mates before starting the experiment. 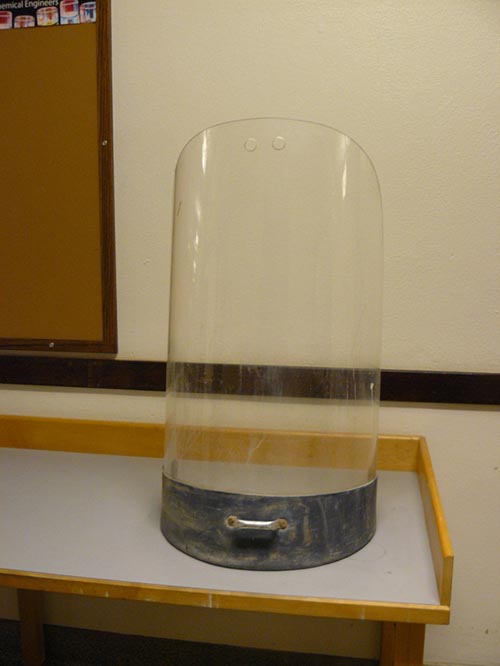 Common Explosion Hazards and their Control

The explosive decomposition of energetic compounds can be triggered by heat, mechanical stress, light, catalysts (e.g., metals), or sparks. The sensitivity to each factor varies with the compound. Often, the stability of a compound decreases with increasing concentration, and the pure or dry compound is the most sensitive to decomposition.

Scale of the experiment

Be aware that the hazards of an experiment are directly related to its scale. Any work on a potentially explosive compound should be performed on small scale (<1 gram) to verify its safety before scaling up the experiment. NEVER scale up a reaction by more than 5-fold per experiment.

Many explosive compounds are sensitive to heat, which can make processes such as concentrating solutions, refluxing, sublimations, and distillations dangerous. Use solvents with low boiling points or vacuum distillations if possible to avoid higher temperatures. Be aware that a solvent with a low boiling point may evaporate quickly.

Compounds that are sensitive to shock or friction must be handled carefully to avoid any mechanical stress. Avoid vigorous stirring, sonication, and grinding. Rough edges or scratches in glassware can be enough to initiate decomposition. Use specialized equipment that has no rough surfaces or sharp edges for crystallizations and extractions of these compounds (i.e., avoid sintered funnels and use paper filtration instead).

Some compounds (e.g., organic peroxides) can decompose on contact with metals. Magnetic stir bars can introduce iron into the solution. Avoid using metal spatulas. Use ceramic, Teflon, or wooden tools to handle such compounds.

To avoid the isolation of explosive compounds, consider generating reagents in-situ. For example, an iodo substitution reaction using aniline proceeds through a diazonium salt that is very dangerous when crystallized. To reduce the risk, the reaction can be performed in-situ as a one-pot substitution.

Many explosions are due to incomplete quenching of reactions. Be sure to fully quench your reaction before proceeding to your workup. Make sure all interior surfaces including the glassware joints get adequate exposure to the quenching reagent.

Make sure emergency equipment such as eyewash stations, emergency showers, and fire extinguishers are readily accessible. Memorize where the fire alarms are and the number to call. Have an evacuation plan. Keep the SDS readily available to show emergency responders. Advance planning can save precious seconds and your life!